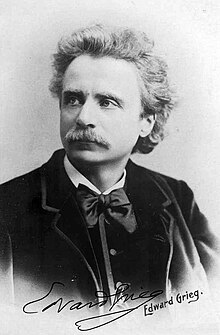 (15 June 1843 – 4 September 1907) was a Norwegian composer and pianist. He is widely considered one of the leading Romantic era composers, and his music is part of the standard classical repertoire worldwide. His use and development of Norwegian folk music in his own compositions brought the music of Norway to international consciousness, as well as helping to develop a national identity, much as Jean Sibelius and Bedřich Smetana did in Finland and Bohemia, respectively.

Grieg is the most celebrated person from the city of Bergen, with numerous statues depicting his image, and many cultural entities named after him: the city's largest concert building (Grieg Hall), its most advanced music school (Grieg Academy) and its professional choir (Edvard Grieg Kor). The Edvard Grieg Museum at Grieg's former home, Troldhaugen, is dedicated to his legacy.

Edvard Hagerup Grieg was born in Bergen, Norway. His parents were Alexander Grieg (1806–1875), a merchant and vice-consul in Bergen; and Gesine Judithe Hagerup (1814–1875), a music teacher and daughter of solicitor and politician Edvard Hagerup. The family name, originally spelled Greig, is associated with the Scottish Clann Ghriogair (Clan Gregor). After the Battle of Culloden in 1746, Grieg's great-grandfather, Alexander Greig, travelled widely, settling in Norway about 1770, and establishing business interests in Bergen.

Edvard Grieg was raised in a musical family. His mother was his first piano teacher and taught him to play at the age of six. Grieg studied in several schools, including Tanks Upper Secondary School.

In the summer of 1858, Grieg met the eminent Norwegian violinist Ole Bull, who was a family friend; Bull's brother was married to Grieg's aunt. Bull recognized the 15-year-old boy's talent and persuaded his parents to send him to the Leipzig Conservatory, the piano department of which was directed by Ignaz Moscheles.

Grieg enrolled in the conservatory, concentrating on the piano, and enjoyed the many concerts and recitals given in Leipzig. He disliked the discipline of the conservatory course of study. An exception was the organ, which was mandatory for piano students. In the spring of 1860, he survived two life-threatening lung diseases, pleurisy and tuberculosis. Throughout his life, Grieg's health was impaired by a destroyed left lung and considerable deformity of his thoracic spine. He suffered from numerous respiratory infections, and ultimately developed combined lung and heart failure. Grieg was admitted many times to spas and sanatoria both in Norway and abroad. Several of his doctors became his personal friends.

In 1861, Grieg made his debut as a concert pianist in Karlshamn, Sweden. In 1862, he finished his studies in Leipzig and held his first concert in his home town, where his programme included Beethoven's Pathétique sonata. 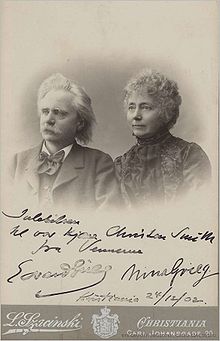 In 1863, Grieg went to Copenhagen, Denmark, and stayed there for three years. He met the Danish composers J. P. E. Hartmann and Niels Gade. He also met his fellow Norwegian composer Rikard Nordraak (composer of the Norwegian national anthem), who became a good friend and source of inspiration. Nordraak died in 1866, and Grieg composed a funeral march in his honor.

On 11 June 1867, Grieg married his first cousin, Nina Hagerup (1845–1935), a lyric soprano. The next year, their only child, Alexandra, was born. Alexandra died in 1869 from meningitis. In the summer of 1868, Grieg wrote his Piano Concerto in A minor while on holiday in Denmark. Edmund Neupert gave the concerto its premiere performance on 3 April 1869 in the Casino Theatre in Copenhagen. Grieg himself was unable to be there due to conducting commitments in Christiania (now Oslo).

In 1868, Franz Liszt, who had not yet met Grieg, wrote a testimonial for him to the Norwegian Ministry of Education, which led to Grieg's obtaining a travel grant. The two men met in Rome in 1870. On Grieg's first visit, they went over Grieg's Violin Sonata No. 1, which pleased Liszt greatly. On his second visit in April, Grieg brought with him the manuscript of his Piano Concerto, which Liszt proceeded to sightread (including the orchestral arrangement). Liszt's rendition greatly impressed his audience, although Grieg gently pointed out to him that he played the first movement too quickly. Liszt also gave Grieg some advice on orchestration (for example, to give the melody of the second theme in the first movement to a solo trumpet).

In 1874–76, Grieg composed incidental music for the premiere of Henrik Ibsen's play Peer Gynt, at the request of the author.

Grieg had close ties with the Bergen Philharmonic Orchestra (Harmonien), and later became Music Director of the orchestra from 1880 to 1882. In 1888, Grieg met Tchaikovsky in Leipzig. Grieg was struck by the greatness of Tchaikovsky. Tchaikovsky thought very highly of Grieg's music, praising its beauty, originality and warmth.

The Norwegian government provided Grieg with a pension as he reached retirement age. In the spring of 1903, Grieg made nine 78-rpm gramophone recordings of his piano music in Paris; all of these historic discs have been reissued on both LPs and CDs, despite limited fidelity. Grieg also made live-recording player piano music rolls for the Hupfeld Phonola piano-player system and Welte-Mignon reproducing system, all of which survive today and can be heard. He also worked with the Aeolian Company for its 'Autograph Metrostyle' piano roll series wherein he indicated the tempo mapping for many of his pieces.

In 1899, Grieg cancelled his concerts in France in protest of the Dreyfus Affair, an anti-semitic scandal that was then roiling French politics. Regarding this scandal, Grieg had written that he hoped that the French might, "Soon return to the spirit of 1789, when the French republic declared that it would defend basic human rights." As a result of his position on the affair, he became the target of much French hate mail of that day.

In 1906, he met the composer and pianist Percy Grainger in London. Grainger was a great admirer of Grieg's music and a strong empathy was quickly established. In a 1907 interview, Grieg stated: “I have written Norwegian Peasant Dances that no one in my country can play, and here comes this Australian who plays them as they ought to be played! He is a genius that we Scandinavians cannot do other than love.”

Edvard Grieg died at the Municipal Hospital in Bergen, Norway in the late summer of 1907 at age 64 from heart failure. He had suffered a long period of illness. His last words were "Well, if it must be so."

The funeral drew between 30,000 and 40,000 people out on the streets of his home town to honor him. Following his wish, his own Funeral March in Memory of Rikard Nordraak was played in an orchestration by his friend Johan Halvorsen, who had married Grieg's niece. In addition, the Funeral March movement from Chopin's Piano Sonata No. 2 was played. Grieg was cremated, and his ashes were entombed in a mountain crypt near his house, Troldhaugen. After the death of his wife, her ashes were later placed alongside his.

Edvard Grieg and his wife considered themselves Unitarians and Nina went to the Unitarian church in Copenhagen after his death.

Some of Grieg's early works include a symphony (which he later suppressed) and a piano sonata. He also wrote three violin sonatas and a cello sonata.

Grieg also composed the incidental music for Henrik Ibsen's play Peer Gynt, which includes the famous excerpt entitled, "In the Hall of the Mountain King". In this piece of music, the adventures of the anti-hero, Peer Gynt, are related, including the episode in which he steals a bride at her wedding. The angry guests chase him, and Peer falls, hitting his head on a rock. He wakes up in a mountain surrounded by trolls. The music of "In the Hall of the Mountain King" represents the angry trolls taunting Peer and gets louder each time the theme repeats. The music ends with Peer escaping from the mountain.

In an 1874 letter to his friend Frants Beyer, Grieg expressed his unhappiness with Dance of the Mountain King's Daughter, one of the movements he composed for Peer Gynt, writing "I have also written something for the scene in the hall of the mountain King – something that I literally can't bear listening to because it absolutely reeks of cow-pies, exaggerated Norwegian nationalism, and trollish self-satisfaction! But I have a hunch that the irony will be discernible."[27]

Grieg's Holberg Suite was originally written for the piano, and later arranged by the composer for string orchestra. Grieg wrote songs in which he set lyrics by poets Heinrich Heine, Johann Wolfgang von Goethe, Henrik Ibsen, Hans Christian Andersen, Rudyard Kipling and others. Russian composer Nikolai Myaskovsky used a theme by Grieg for the variations with which he closed his Third String Quartet. Norwegian pianist Eva Knardahl recorded the composer's complete piano music on 13 LPs for BIS Records in 1977-1980. The recordings were reissued in 2006 on 12 compact discs, also on BIS Records. Grieg himself recorded many of these piano works before his death in 1907.

Edvard Grieg and his wife, Nina's home in Bergen, Norway 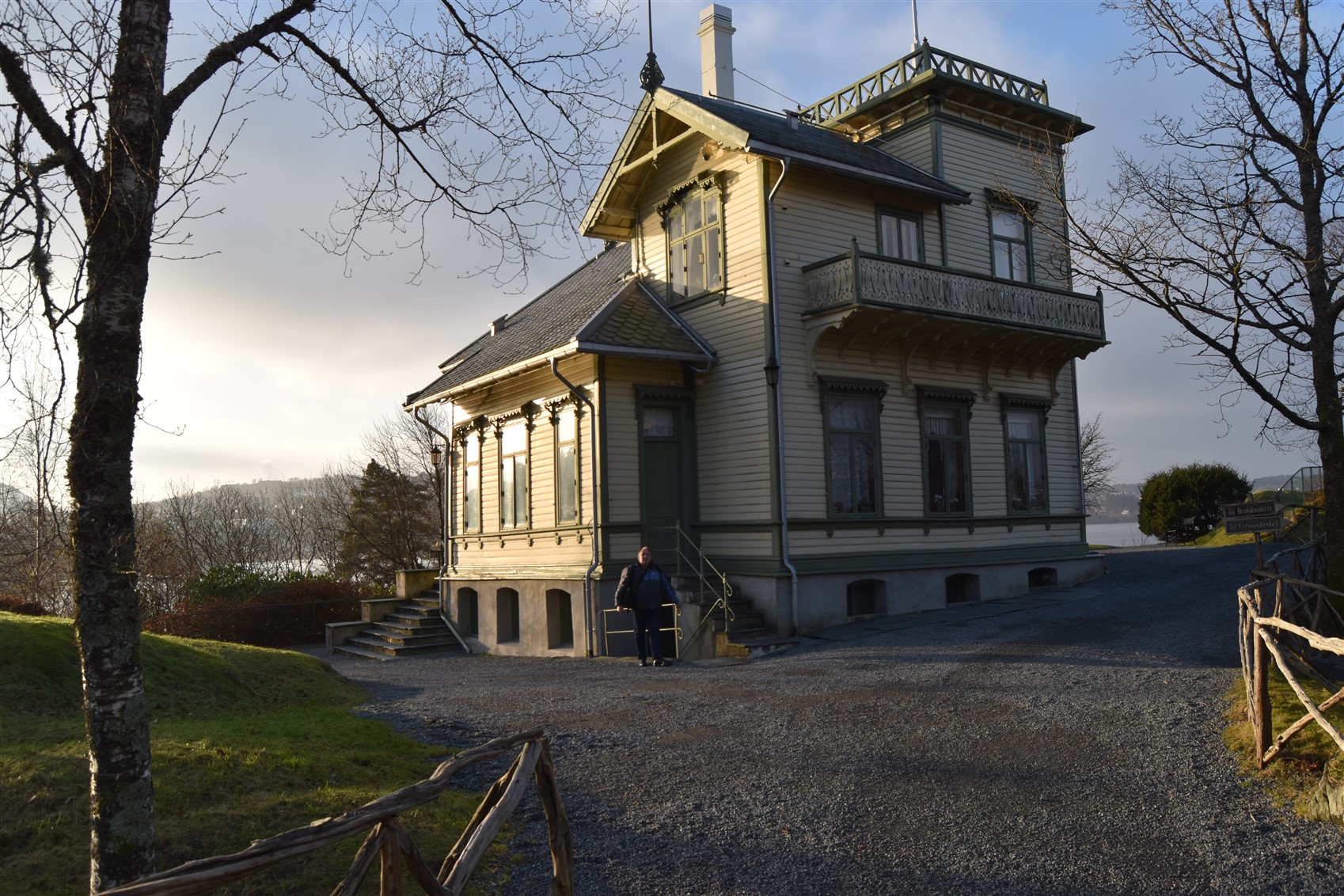 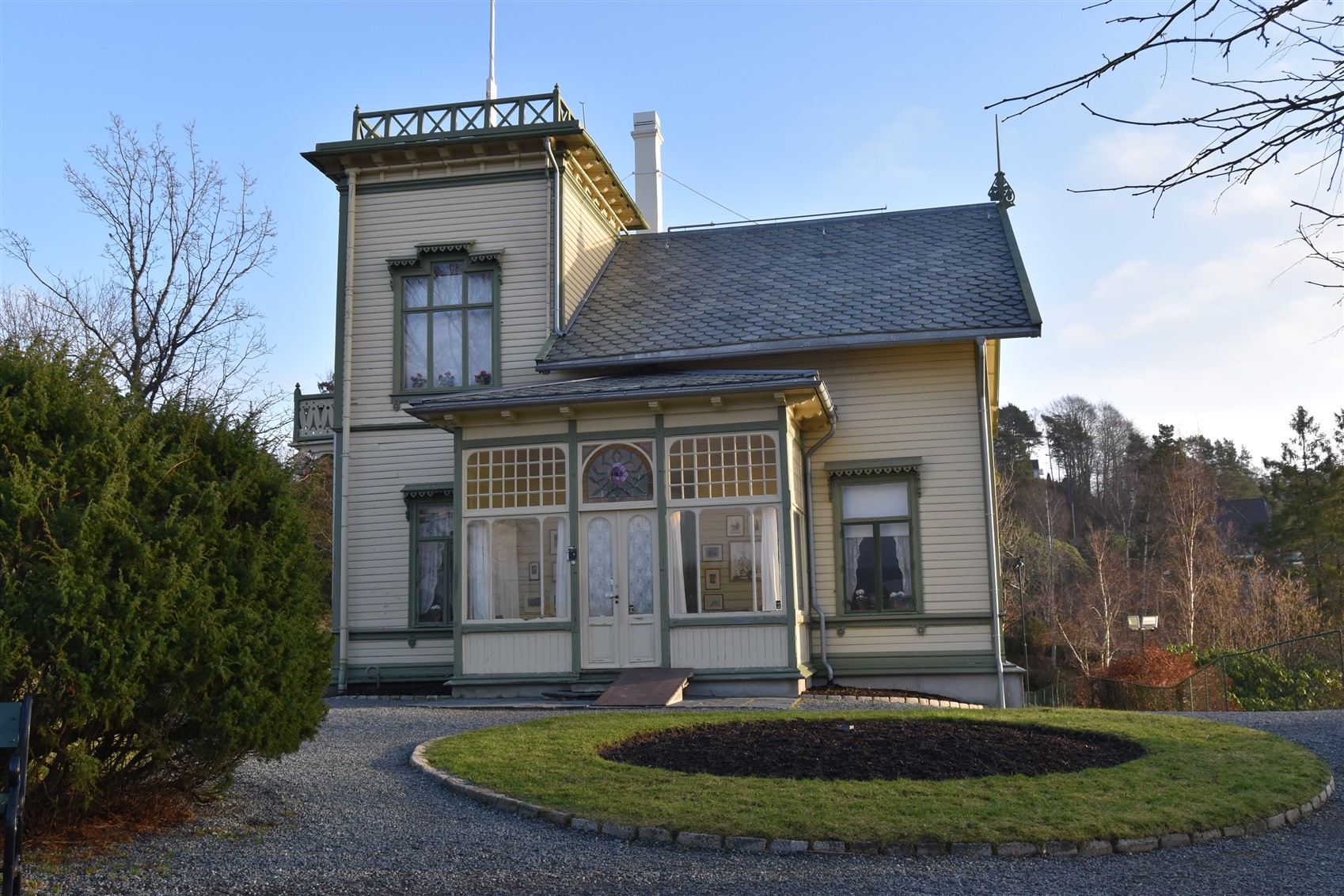 Statue of Edvard Grieg at his home, Troldhaugen, Bergen, Norway 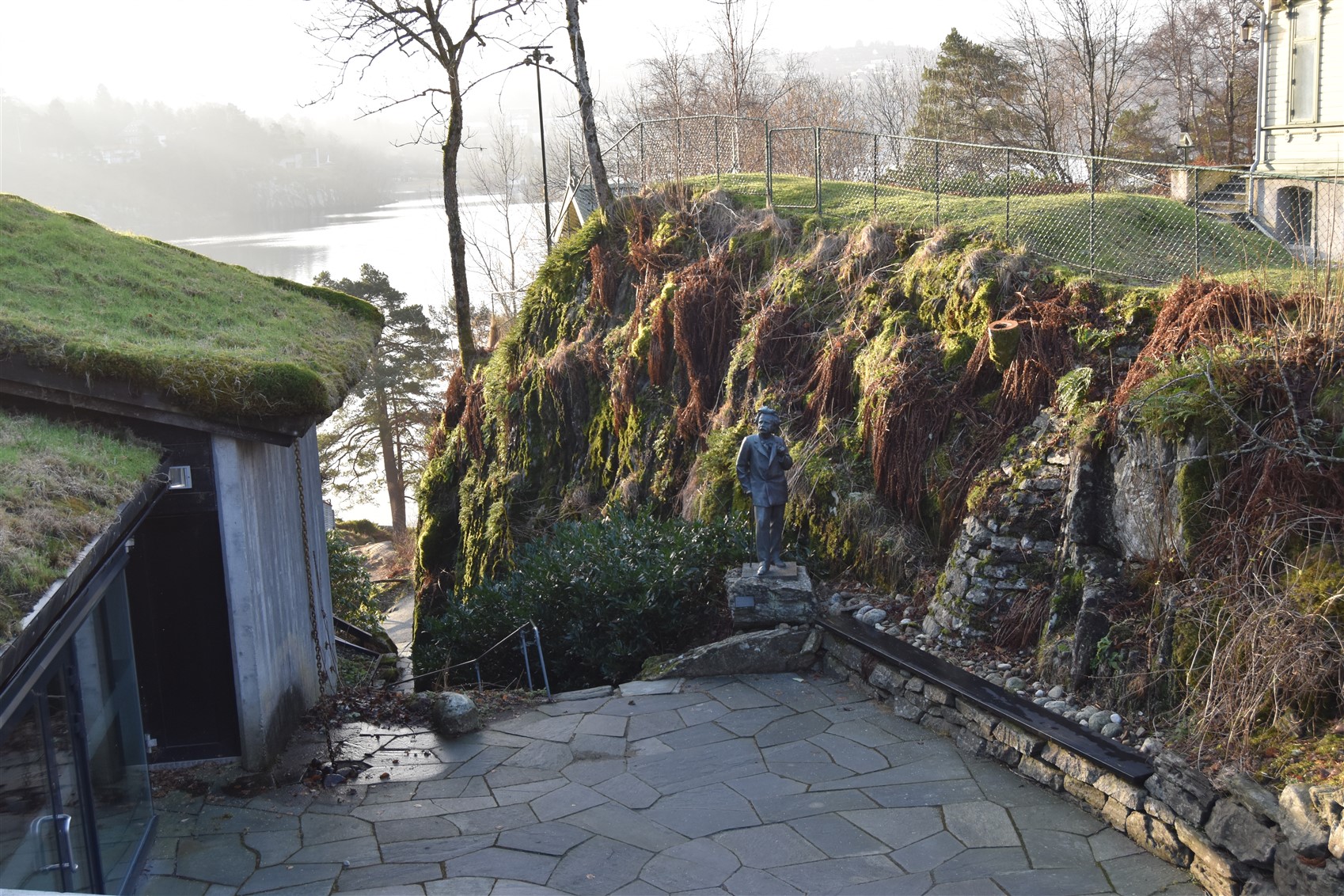 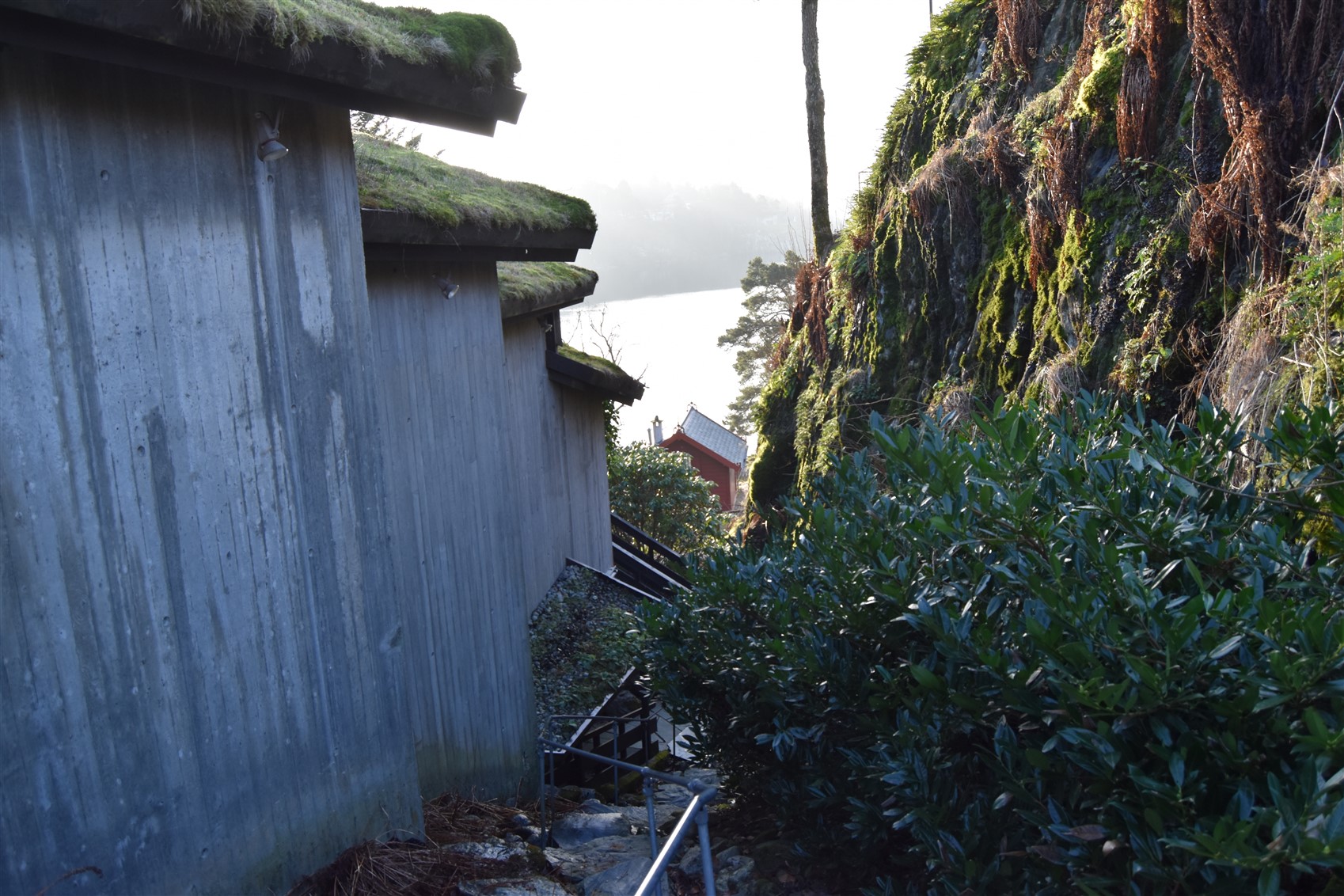 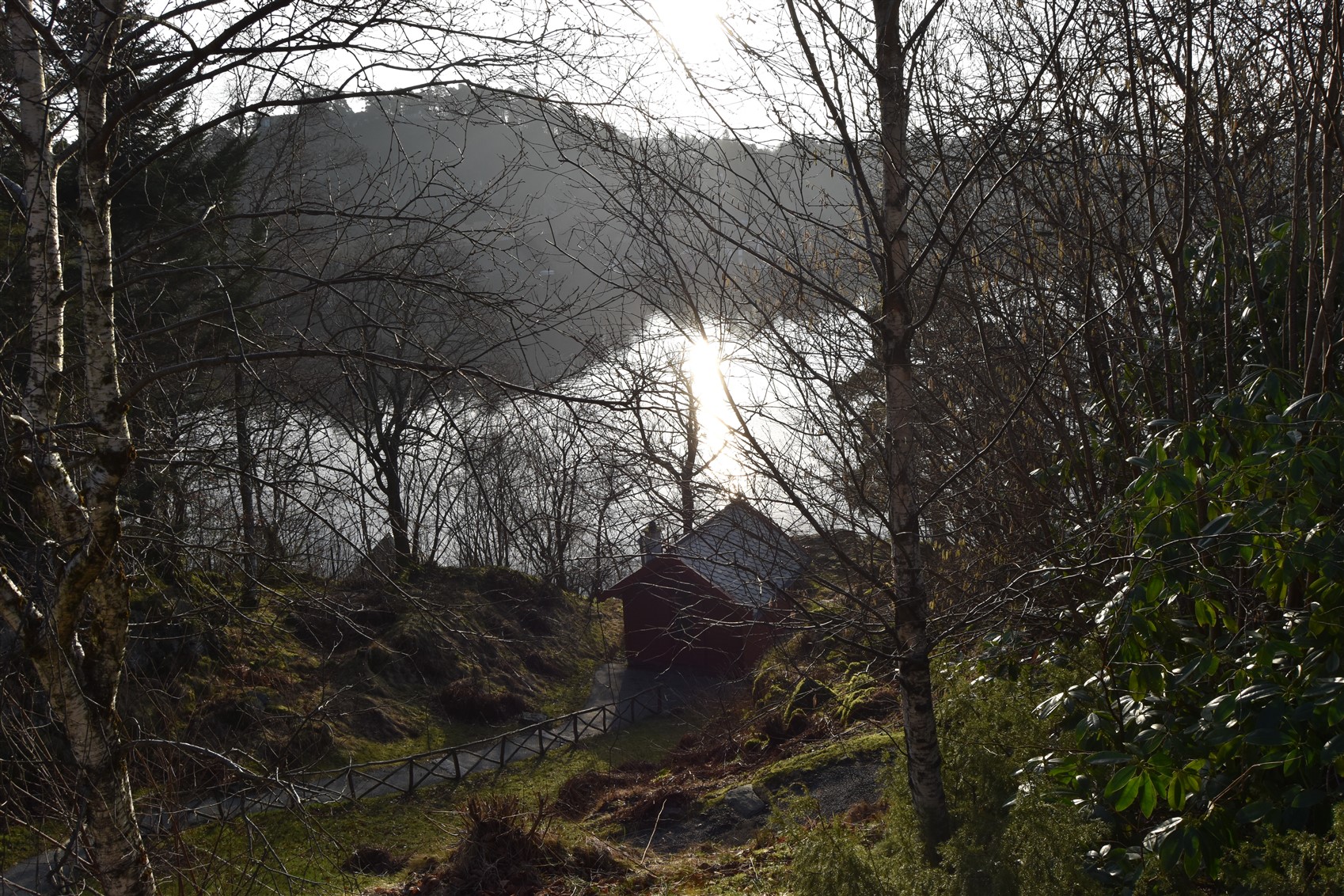 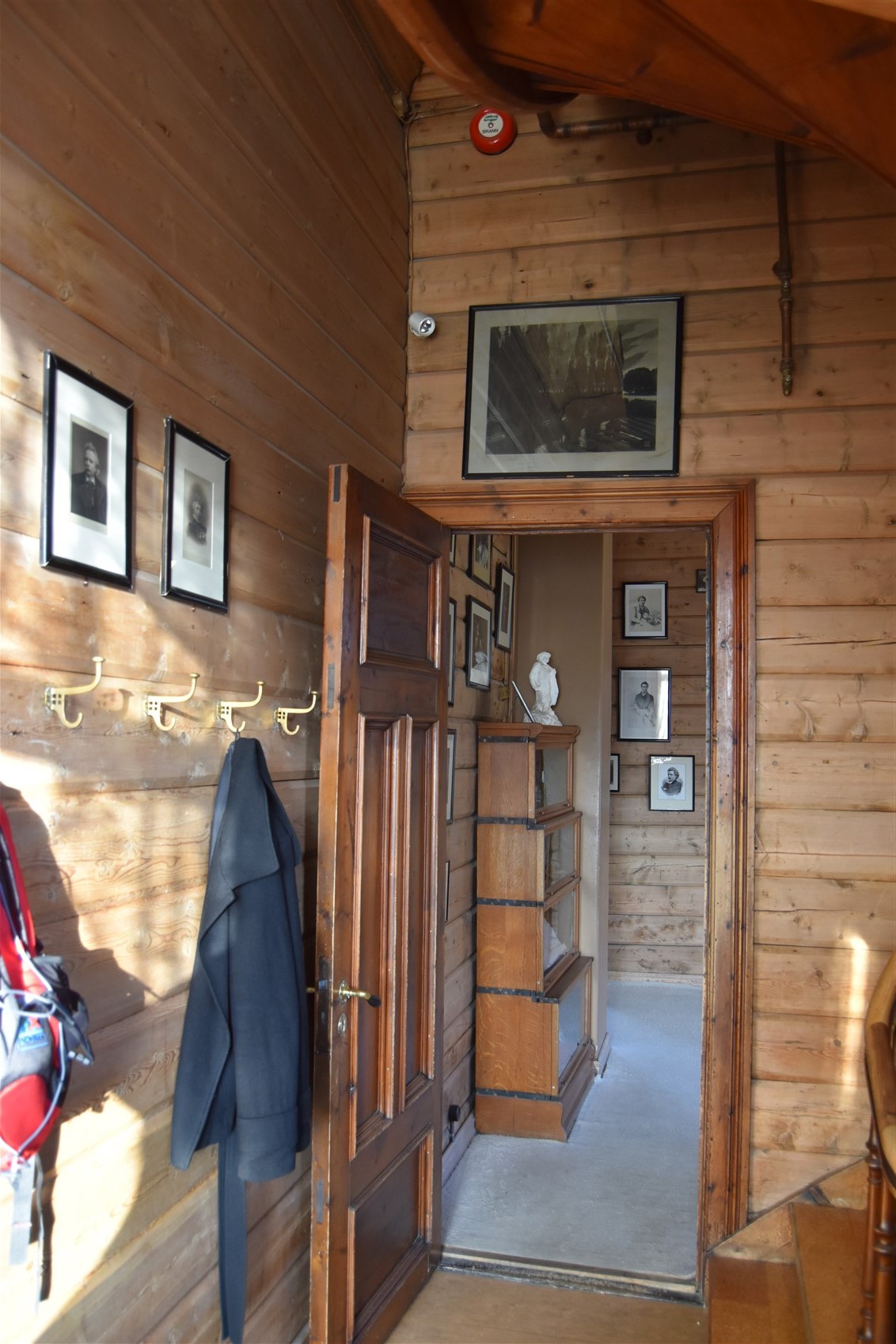 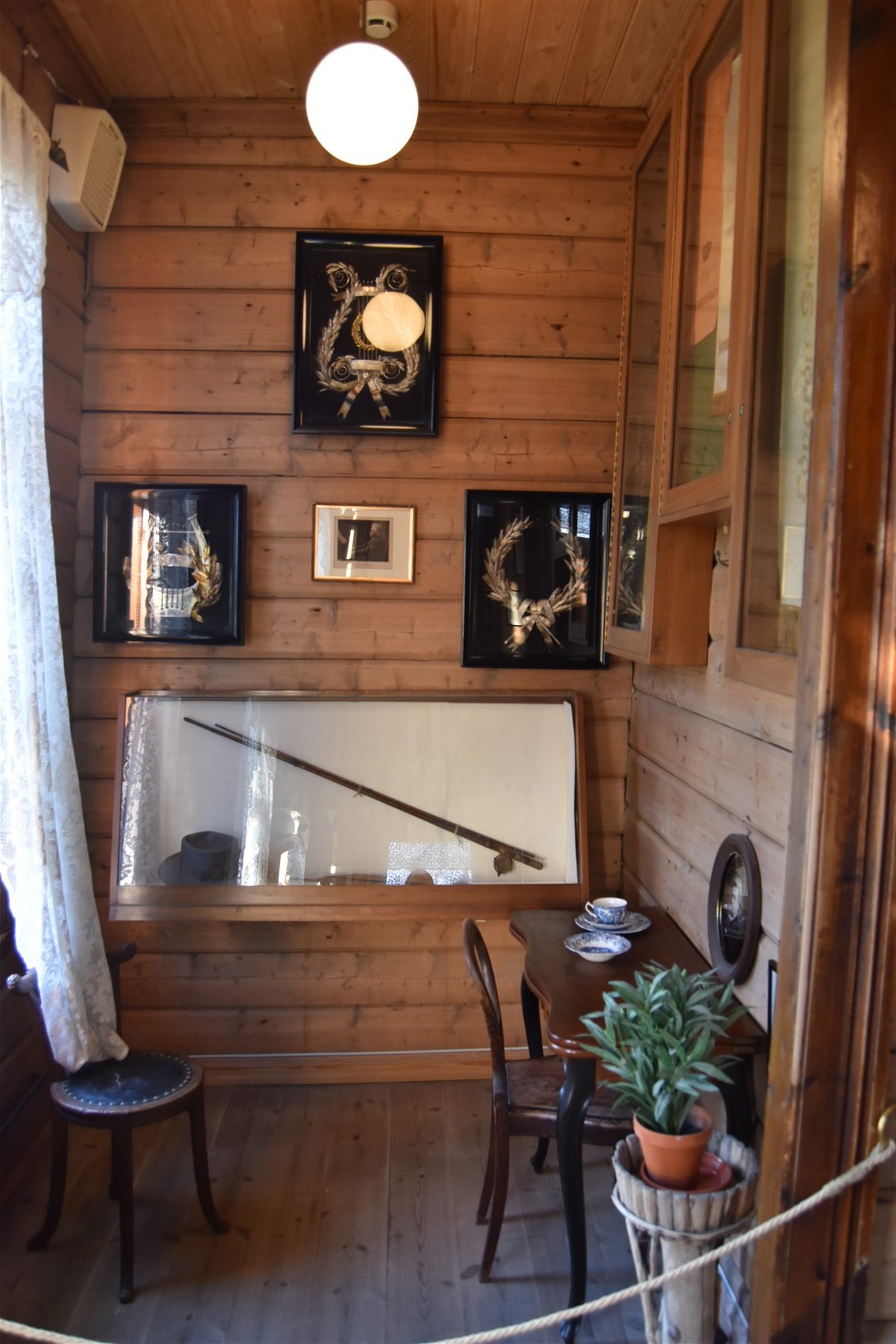 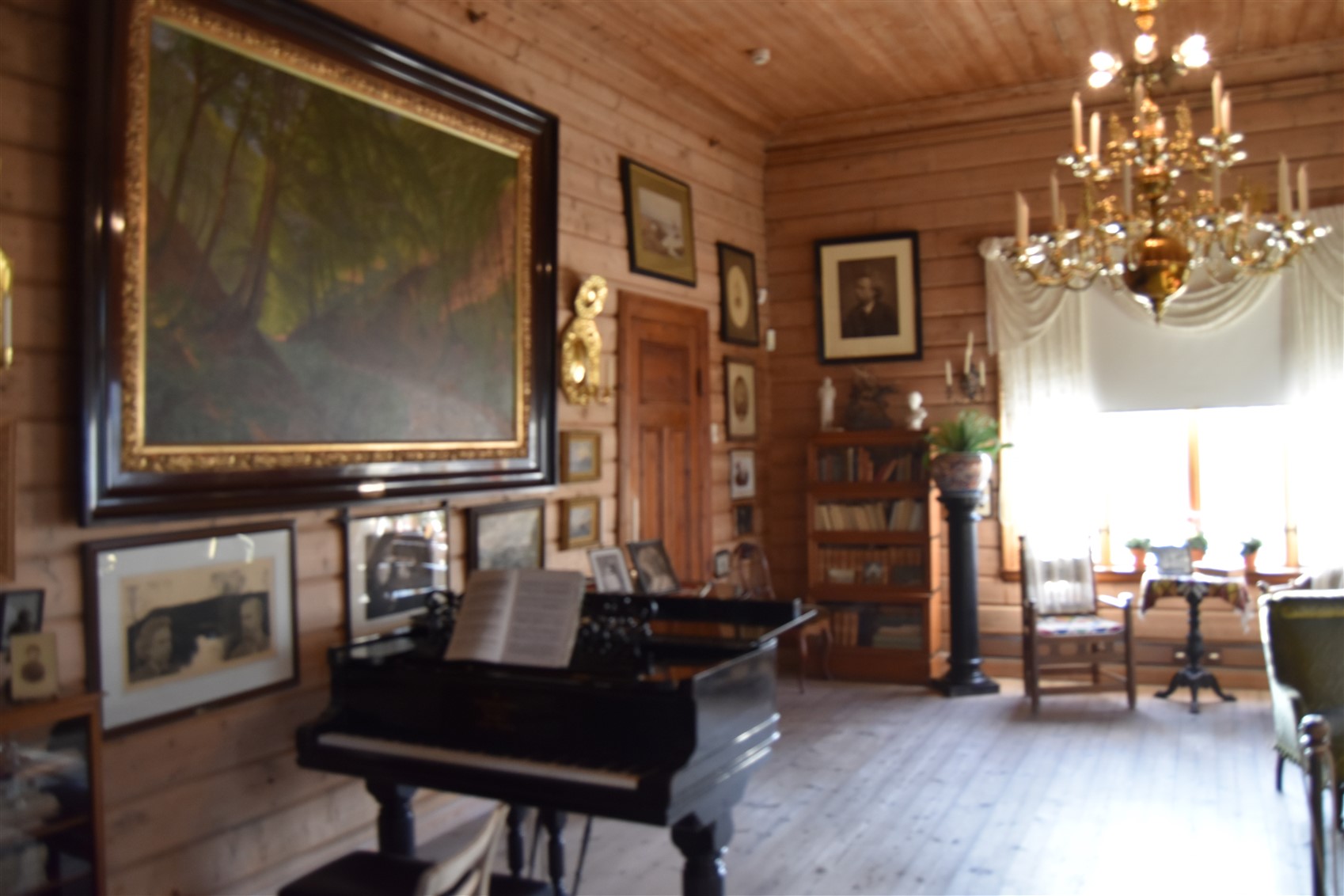 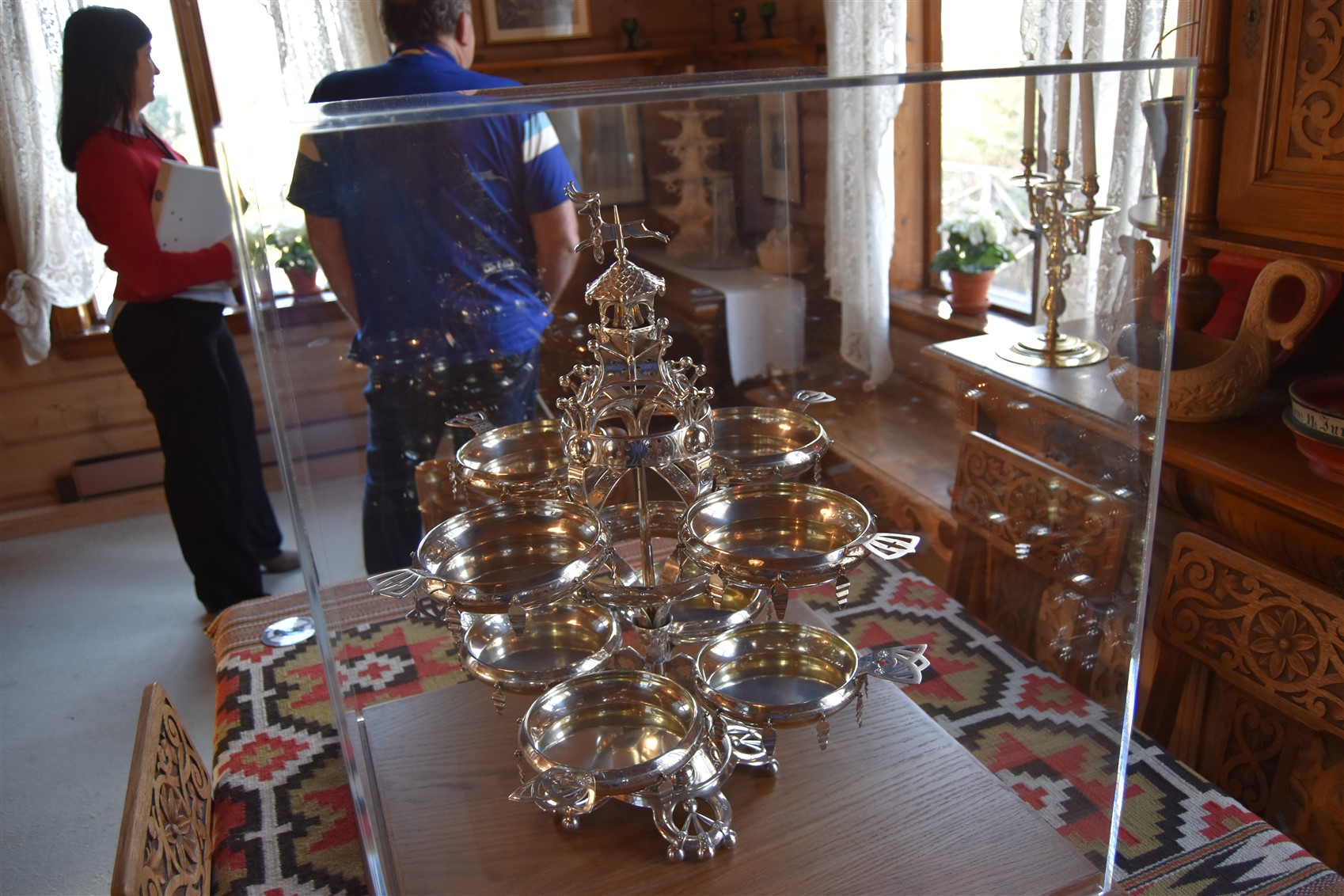 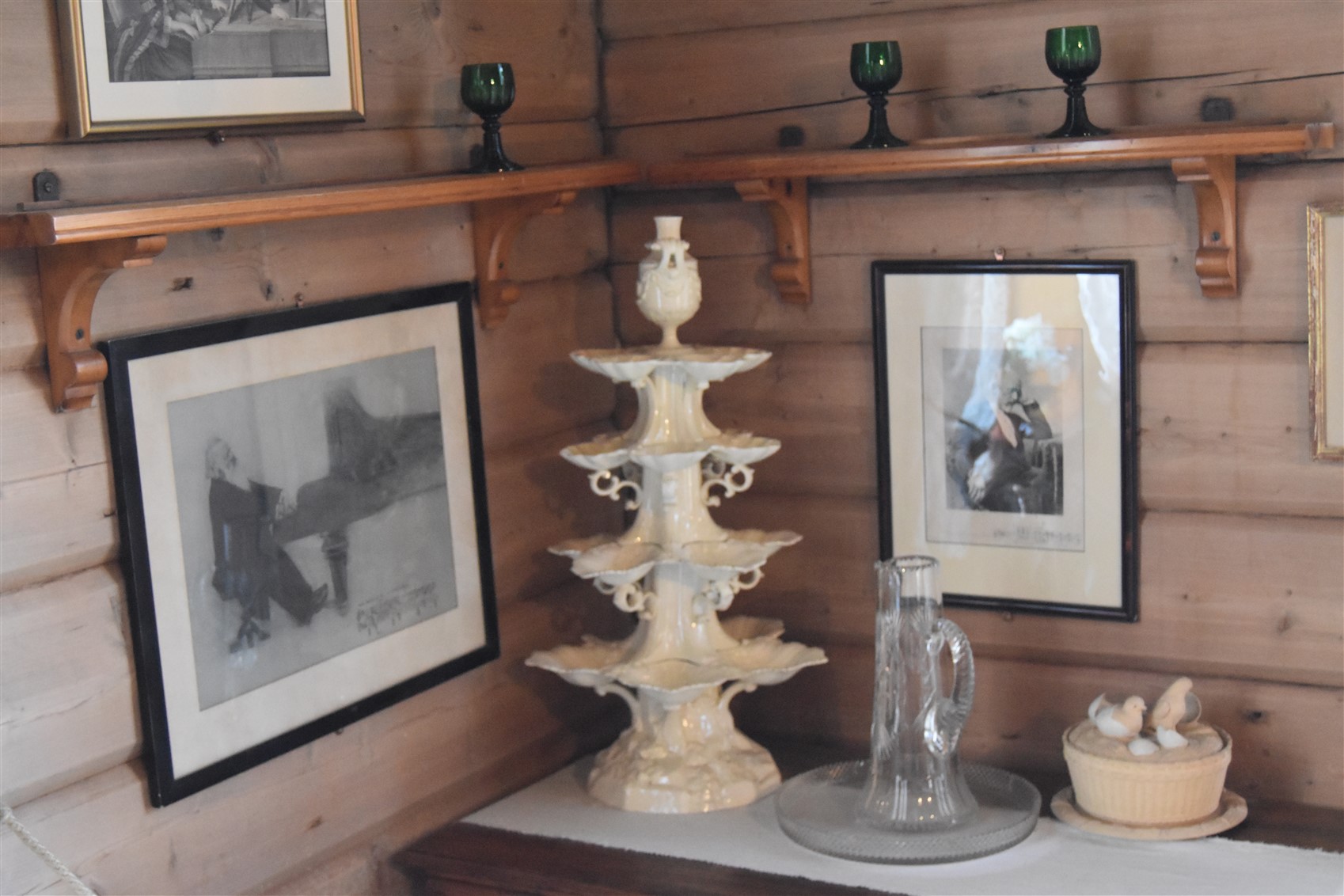 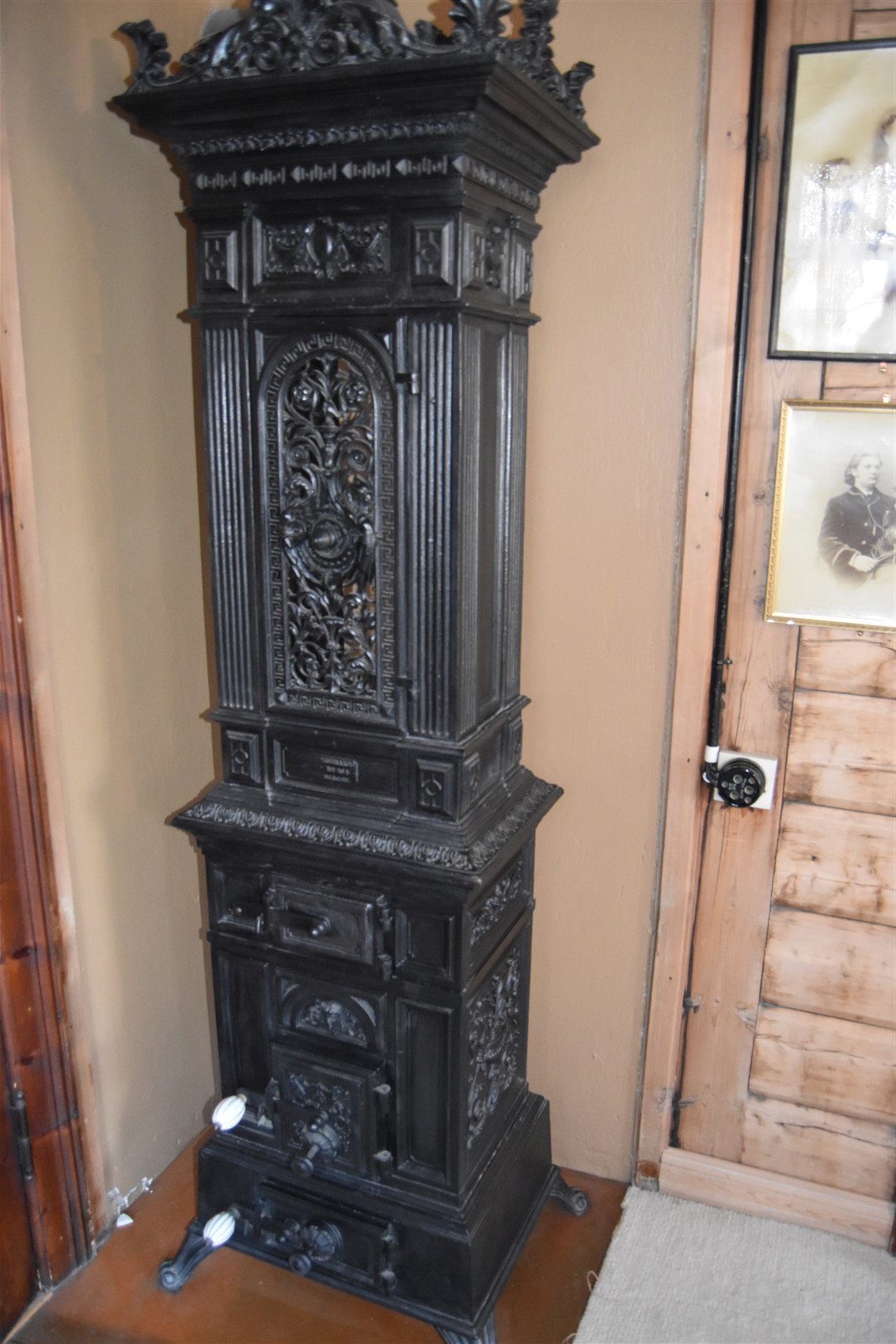 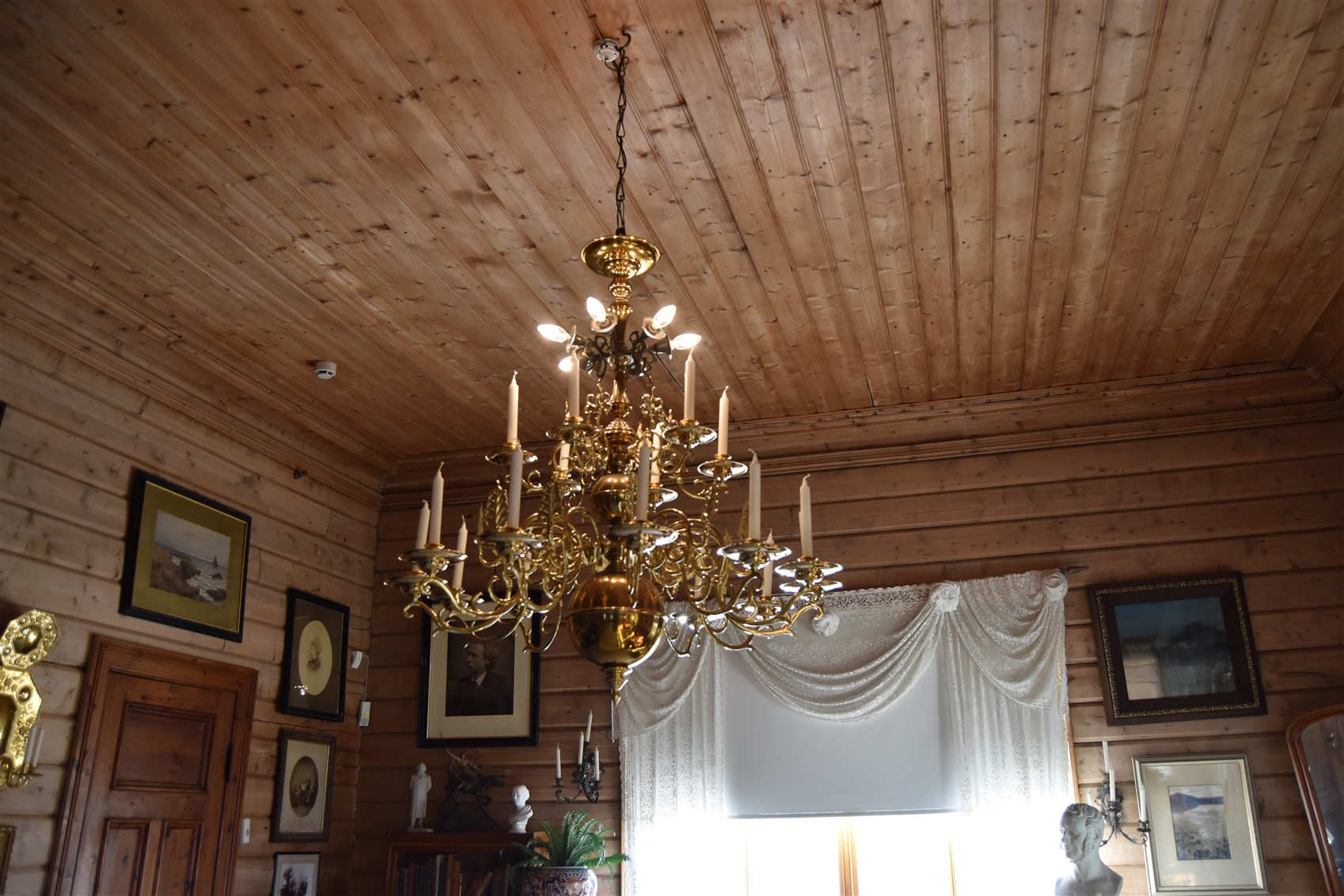 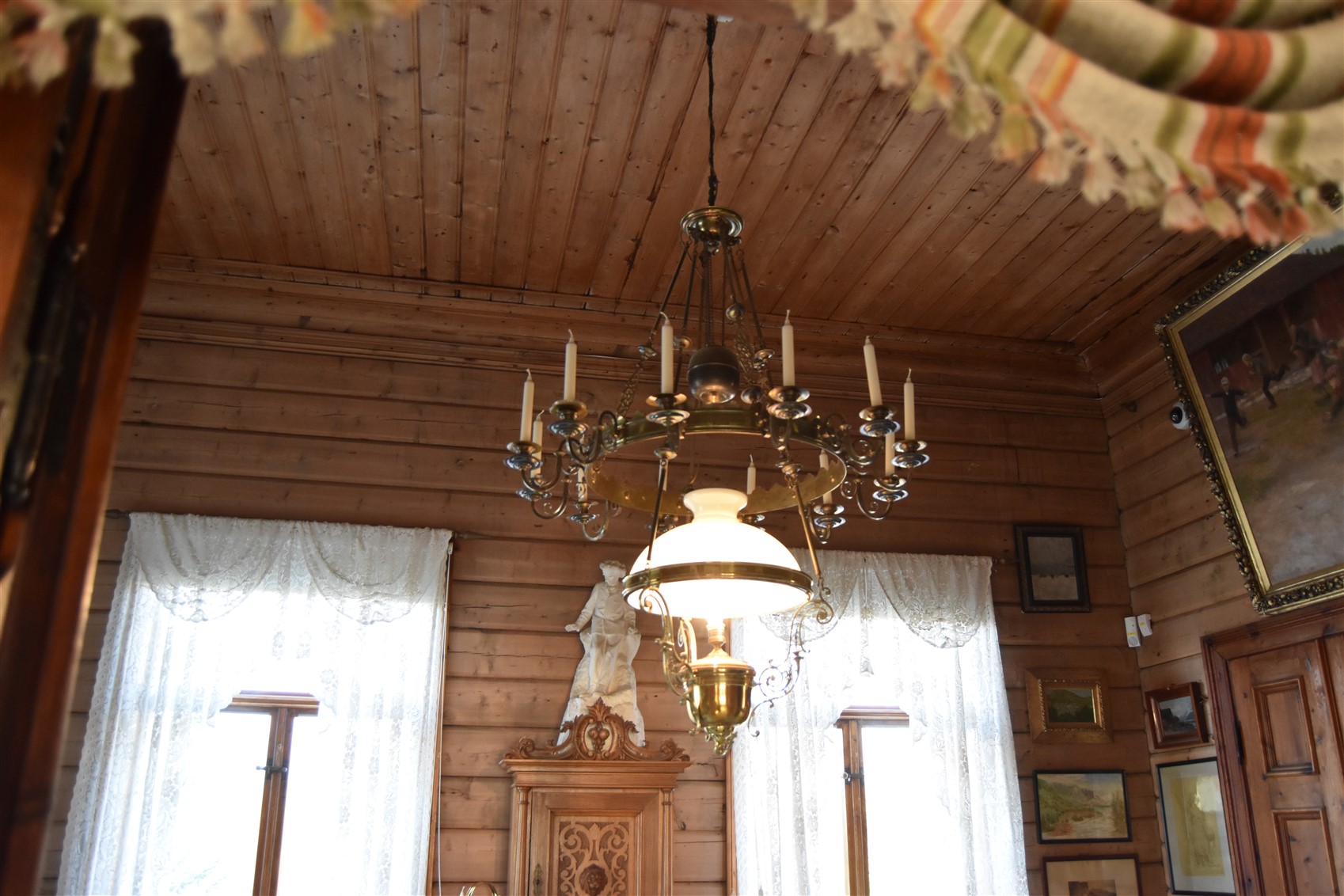 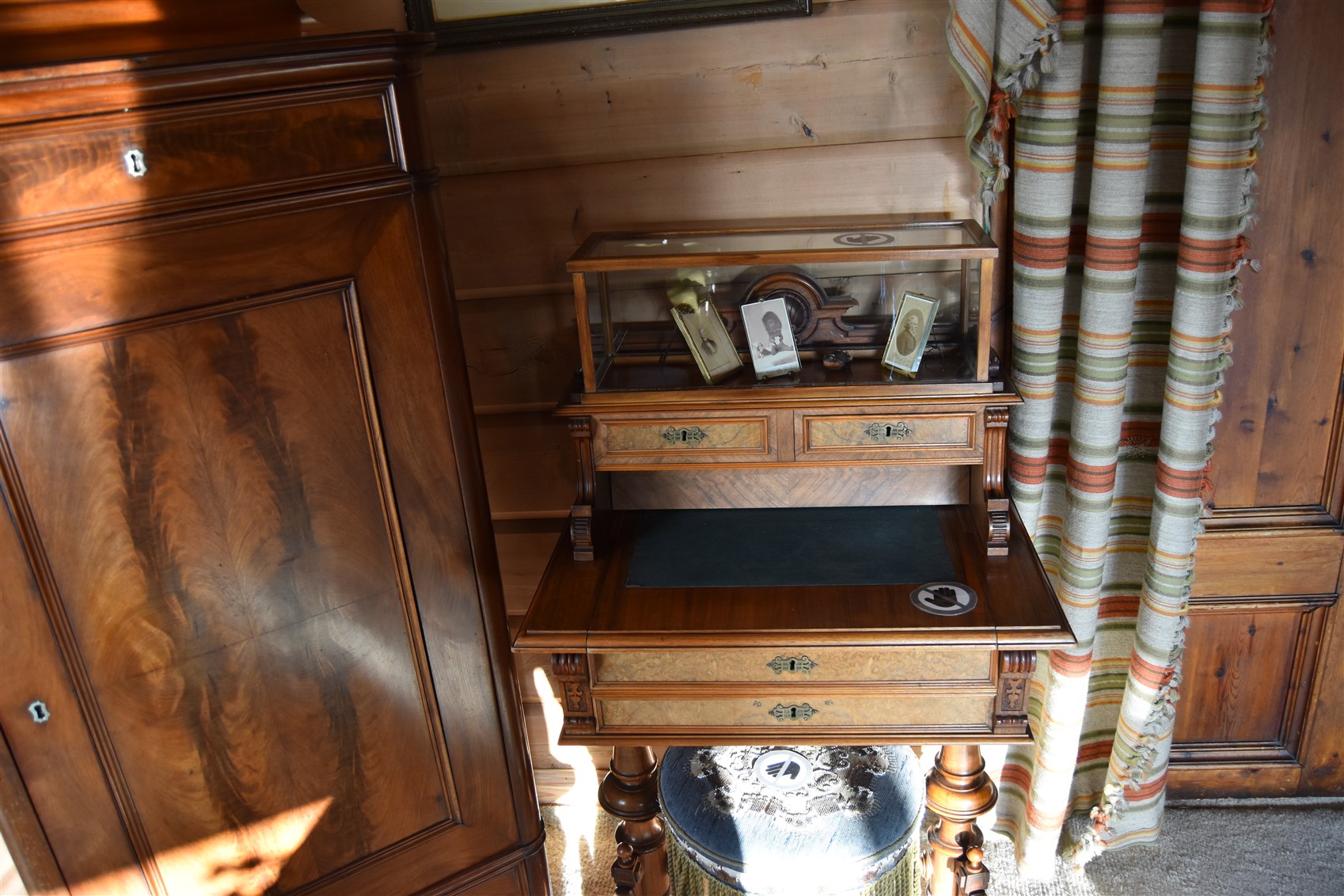 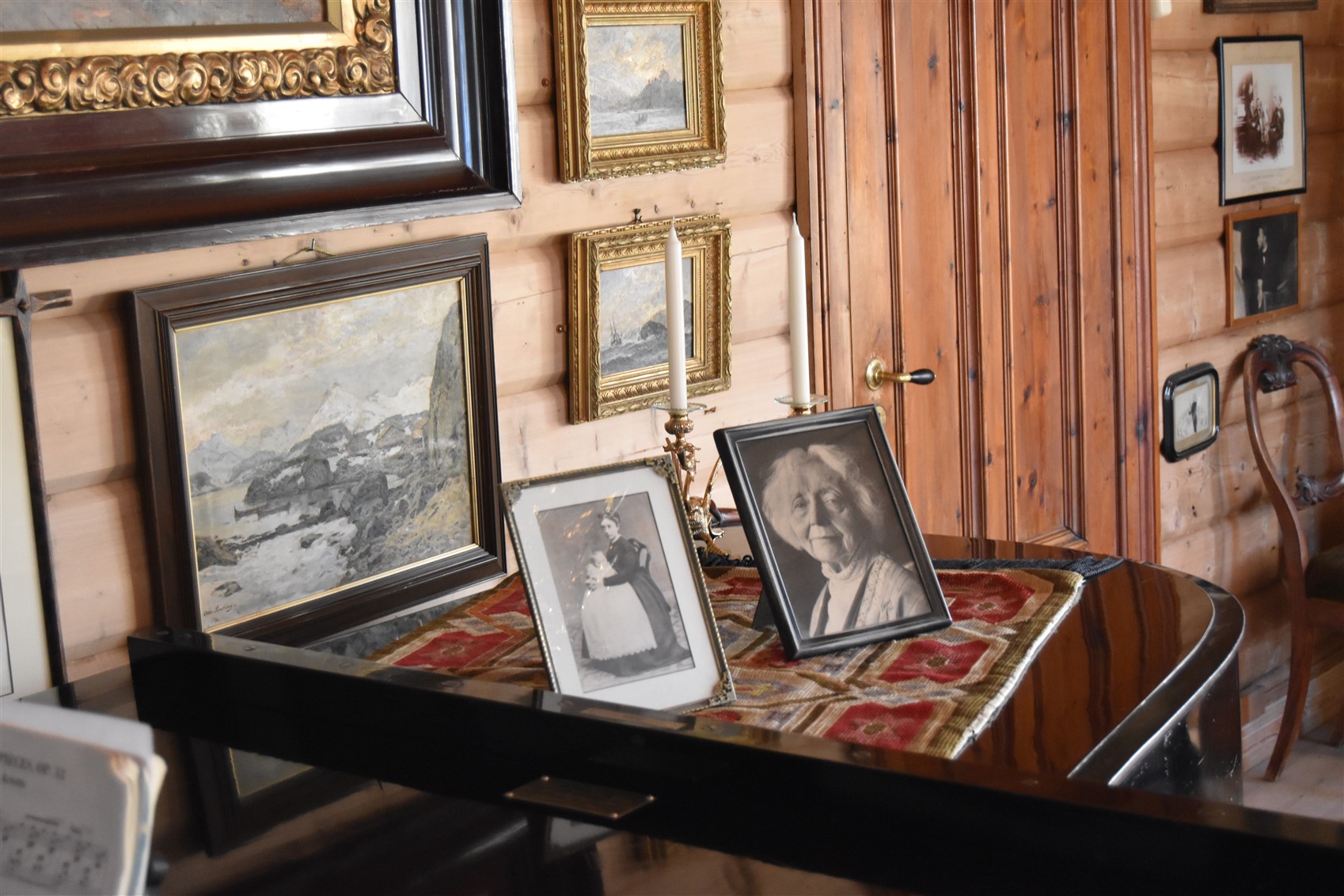 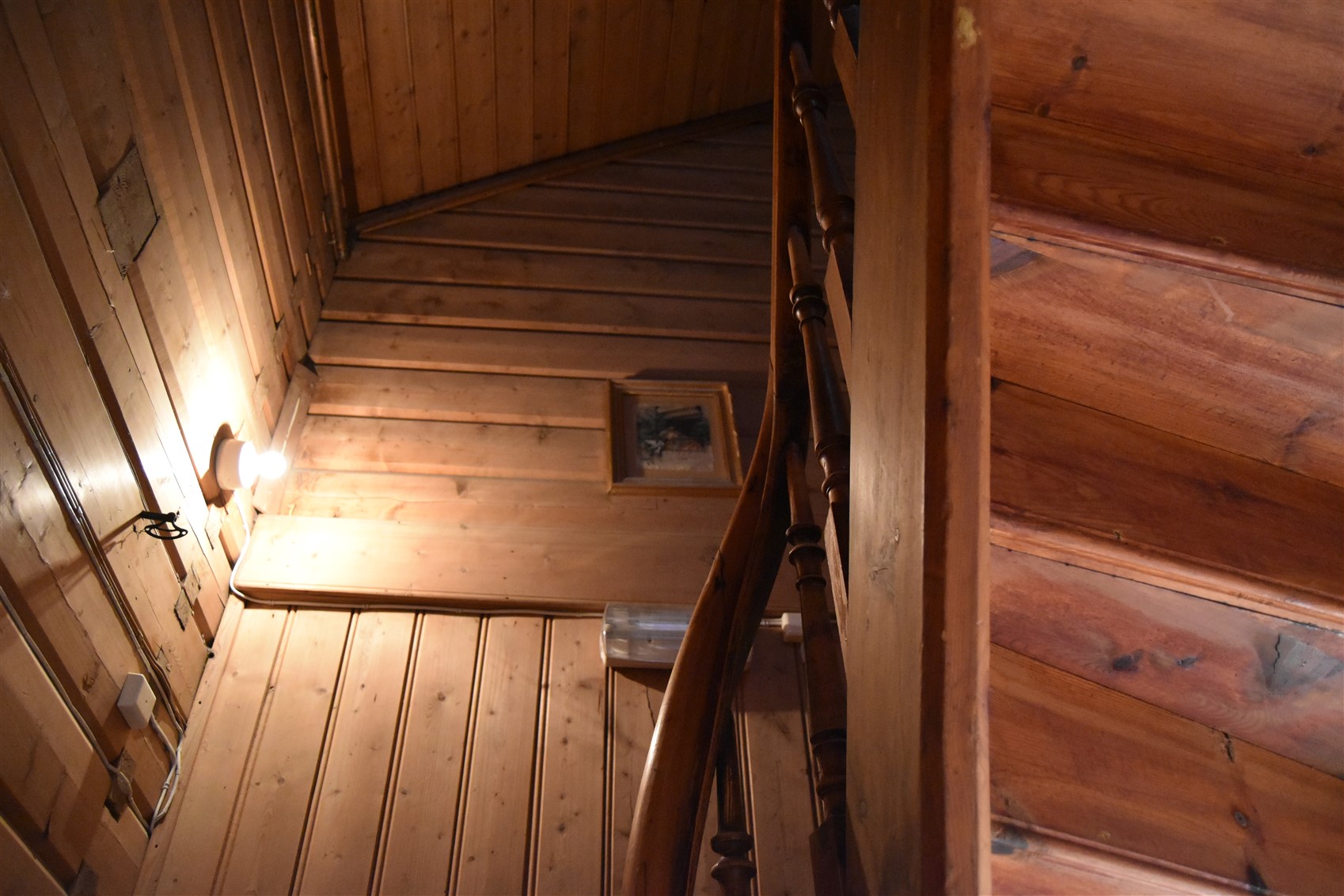 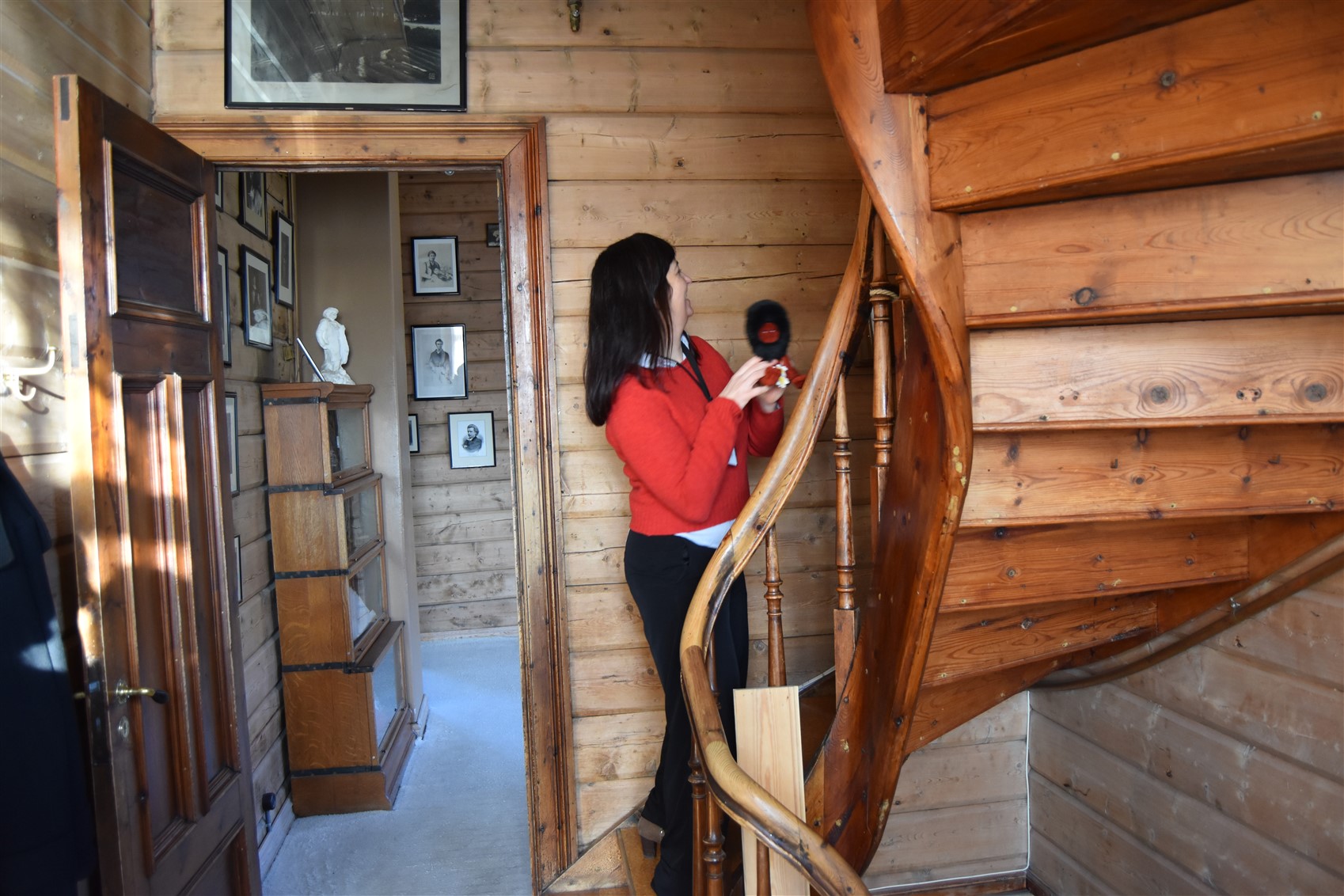 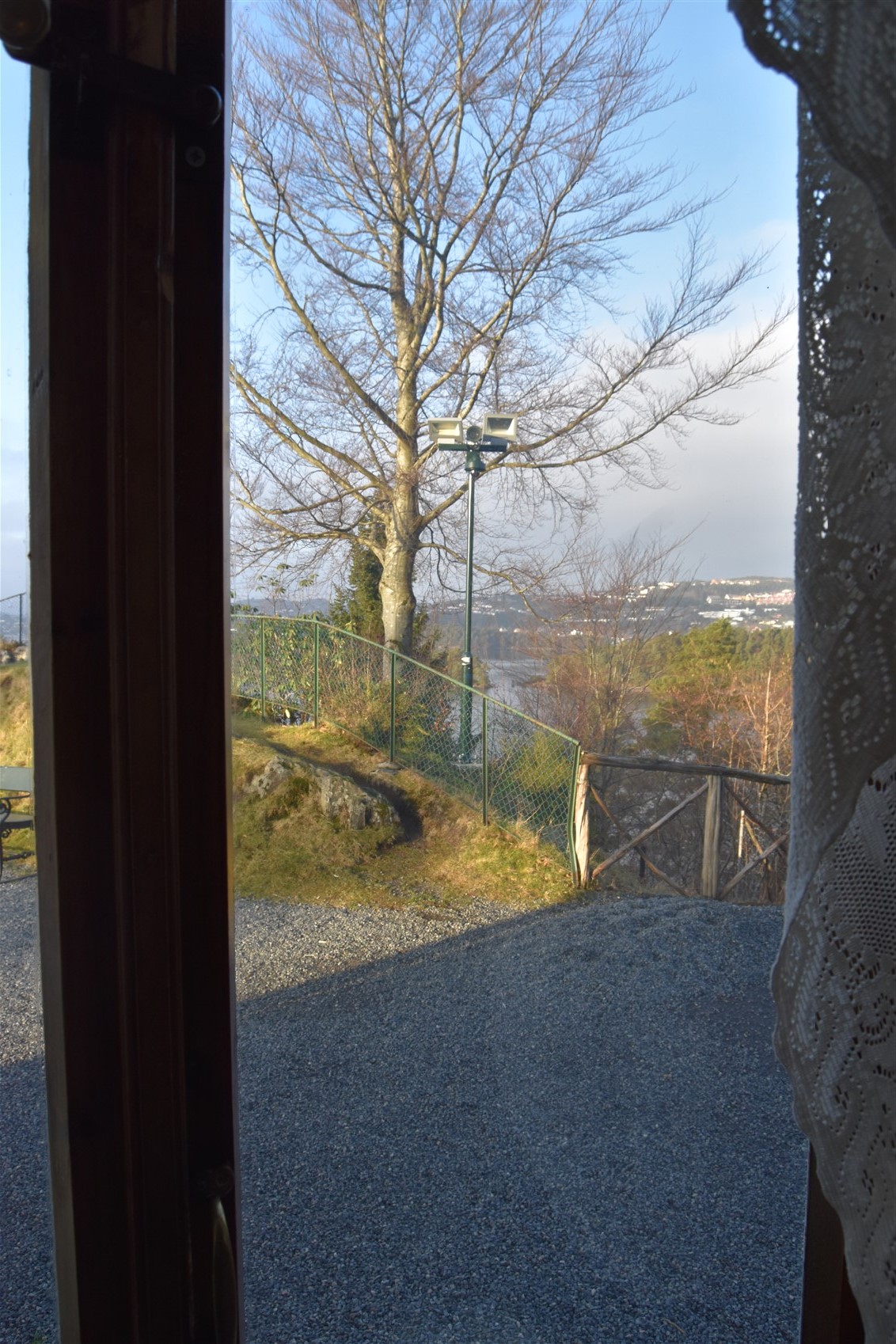 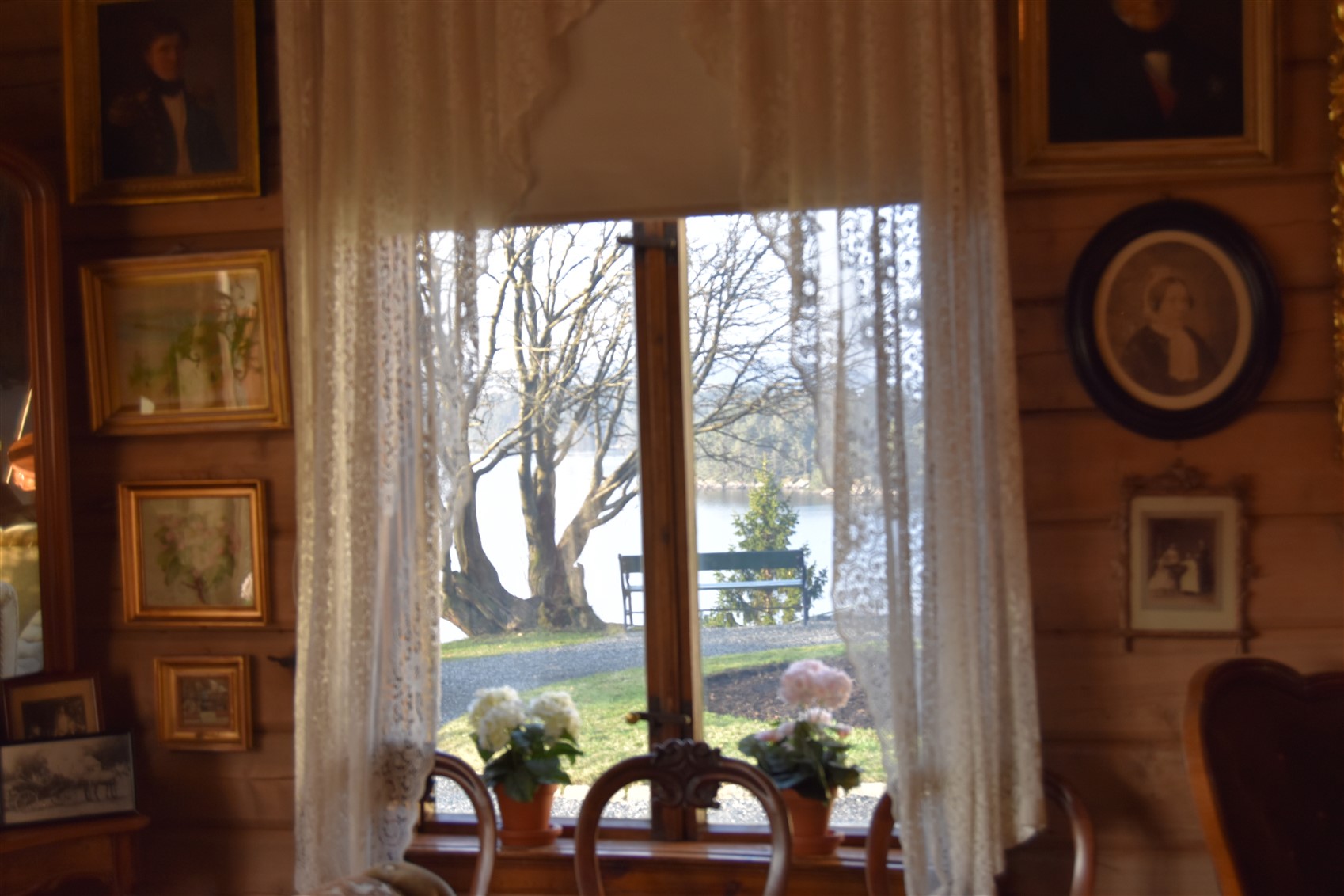 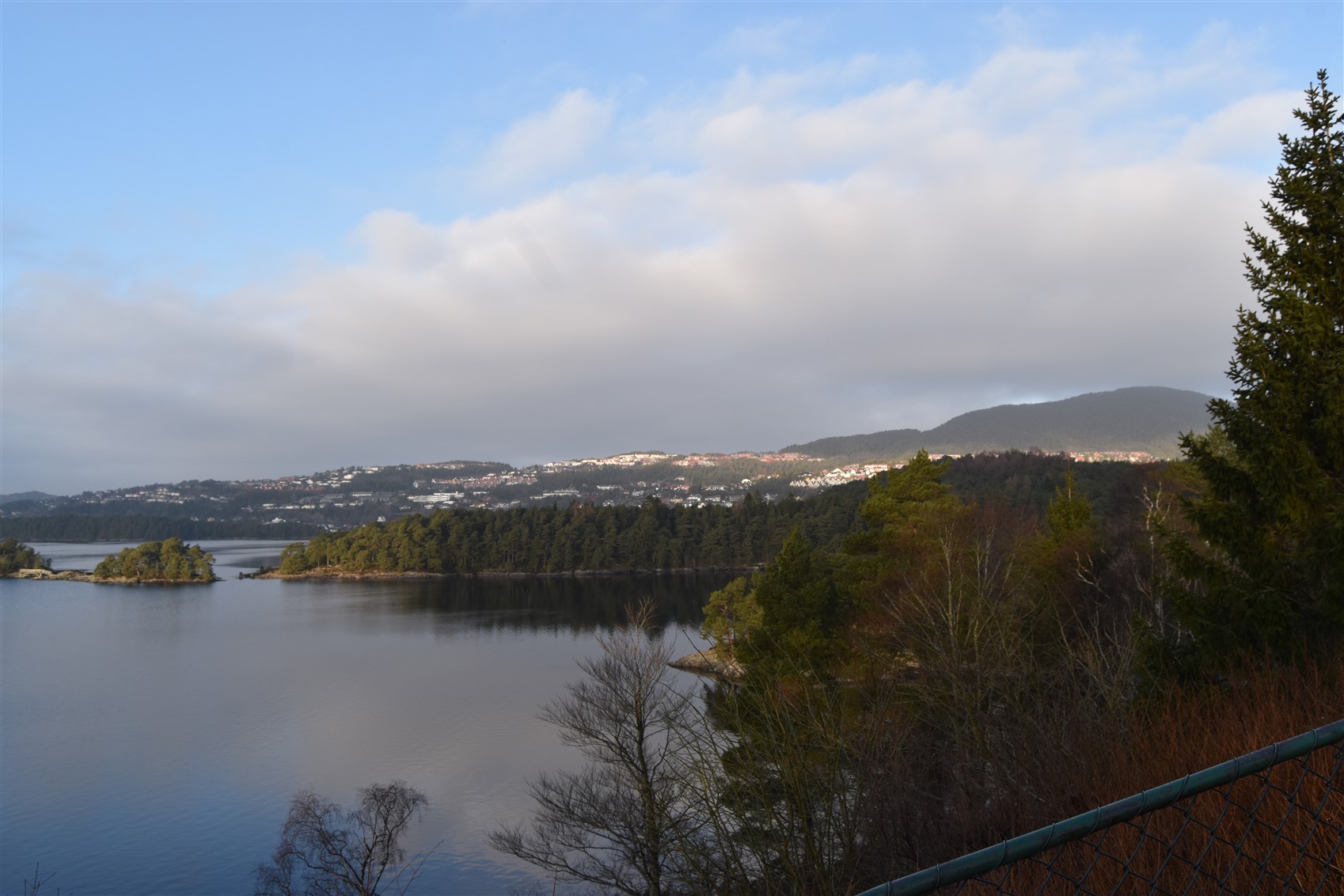 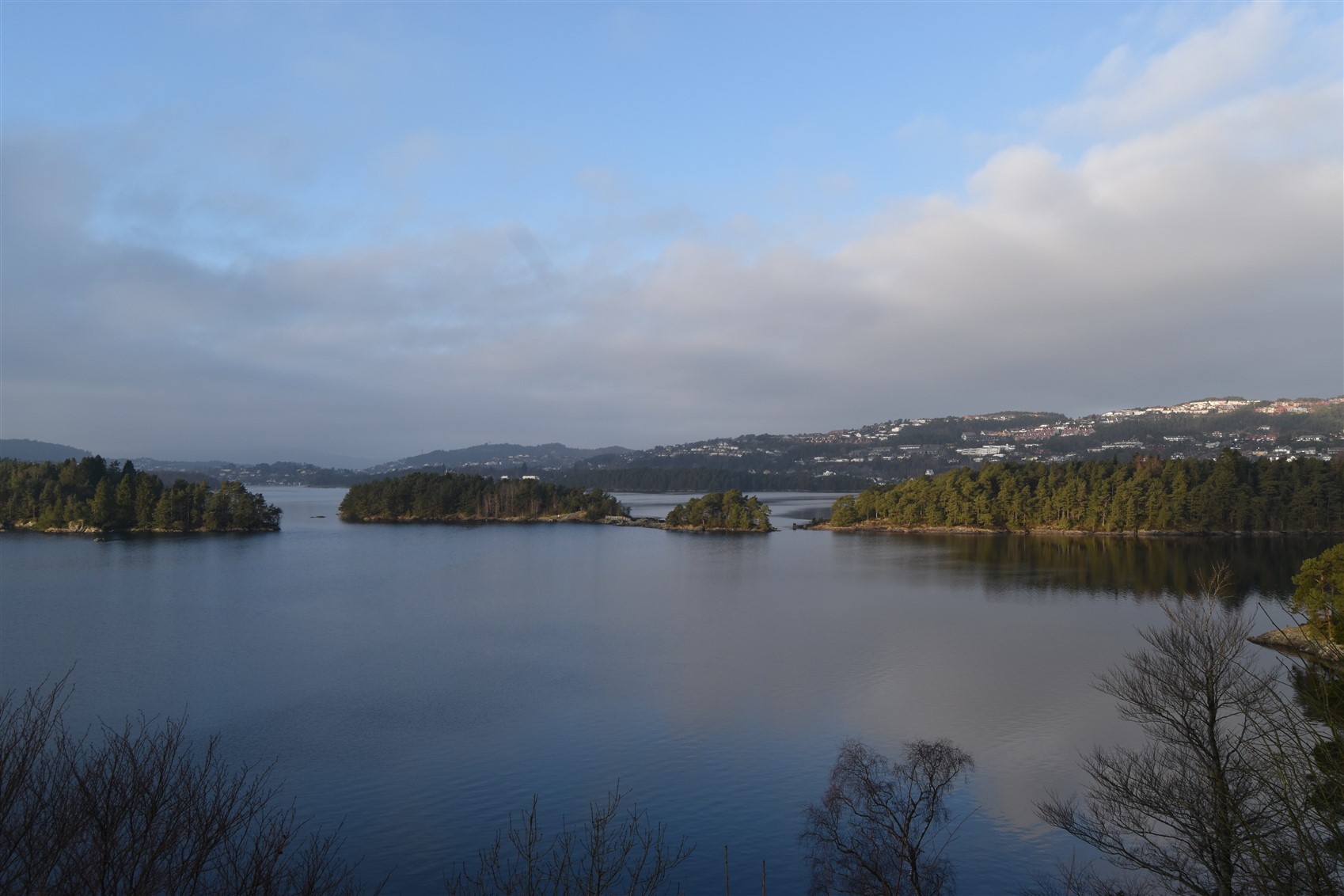 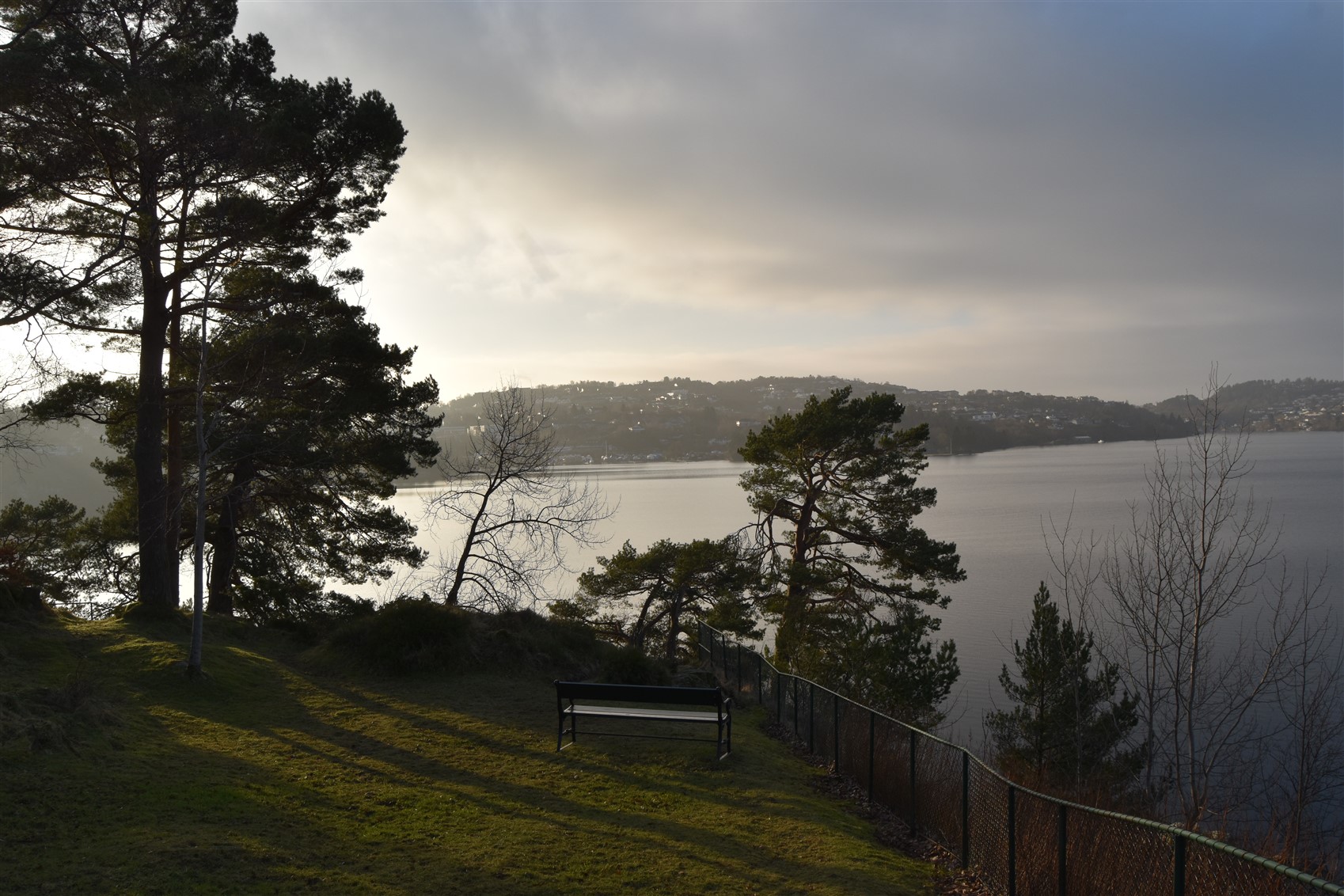 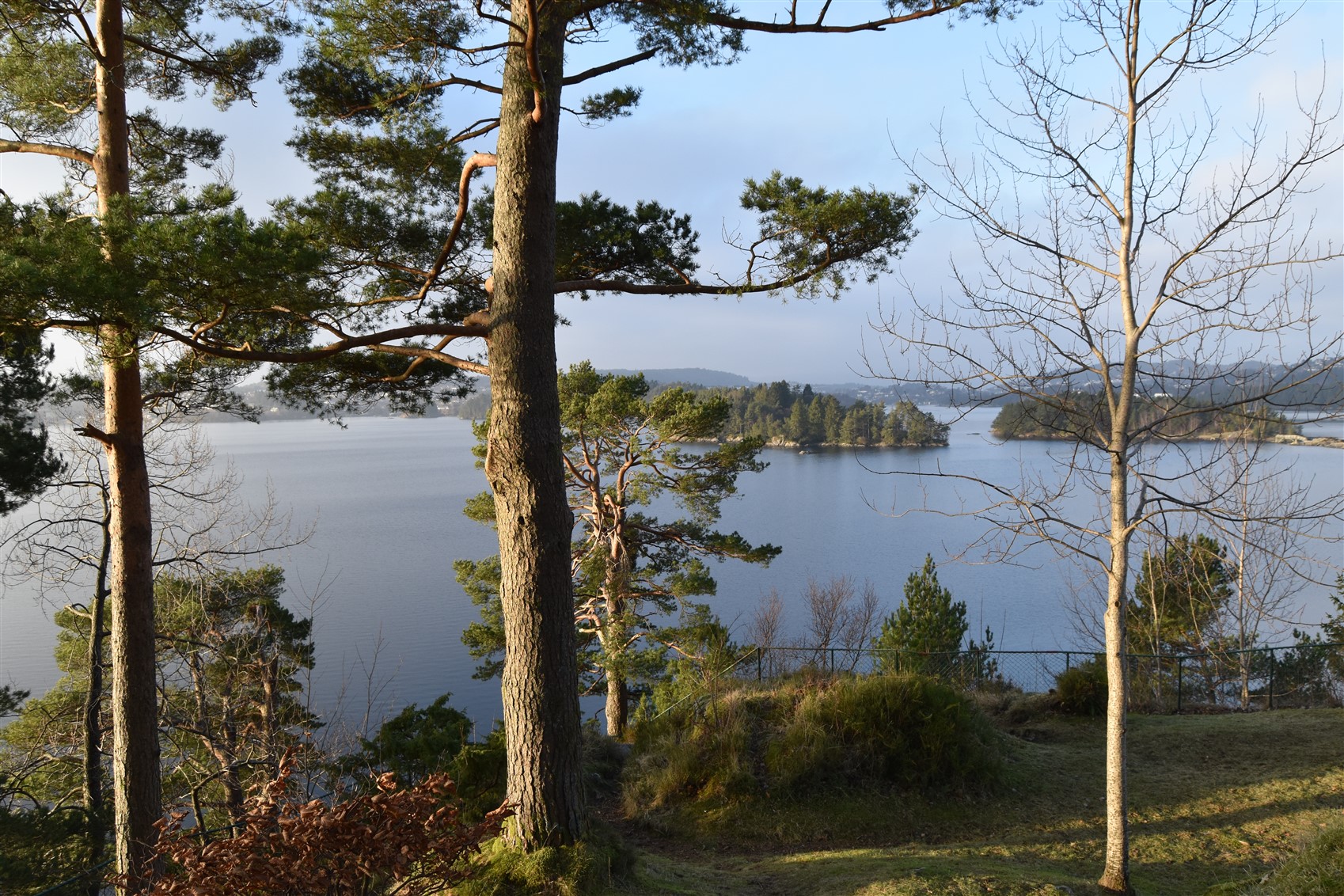 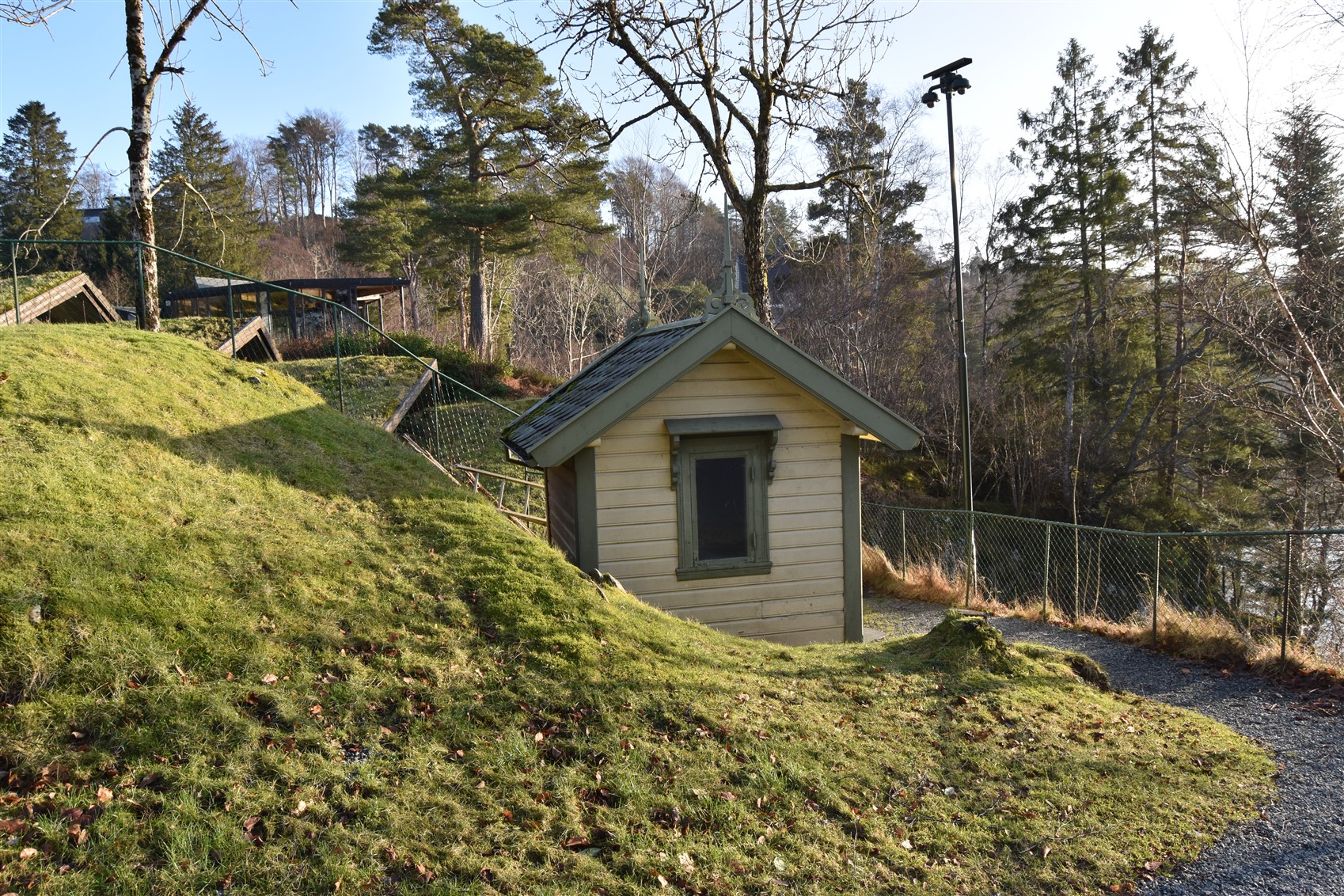